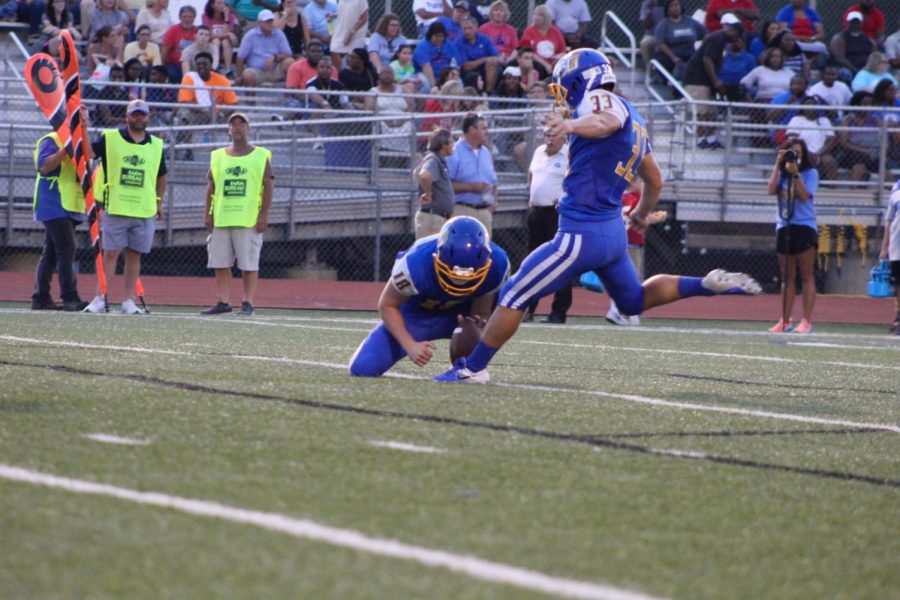 Senior Aubrey Bishop holds the ball while junior Jack Tannehill kicks a field goal. Bishop has a single PAT made this season

The Oxford Chargers will be hosting the Hernando Tigers for their senior night.  The Chargers are coming off of a hard-fought, 10-0 win against Olive Branch.  The Tigers, who have no division wins on the year, were shut out by Horn Lake last week 24-0.  Last year in Hernando, Oxford barely won a 23-22 game due to the Tigers missing a field goal as time expired.

Oxford TE/DE Clay Cromwell: Cromwell has been a breakout player in his senior campaign for the Chargers, on both sides of the ball.  Club and all, Cromwell has recorded 18 tackles and a sack on the defensive line.  On offense, he has a single reception for a touchdown.  While the stats don’t necessarily jump off the page, Cromwell’s impact this year has been huge for the Chargers.

Hernando QB Zach Wilcke: The Tigers like to throw the ball often, just like last year with the dynamic duo of QB Dylan Faulk and WR Kelly Smith.  Since Faulk’s departure, Wilcke has stepped into the QB position for the Tigers.  On the year, the senior quarterback has thrown for 1455 yards and 14 touchdowns, albeit with 12 interceptions.

Oxford K/P Aubrey Bishop: Bishop joined the Charger bomb squad his junior year and has been a big addition on special teams for Oxford.  He primarily holds on kicks for the team, which he excels at.  While he hasn’t gotten a chance to show off his punts in game, Bishop is also a very talented punter.  If the Chargers get a big lead, like they should, Bishop should get a chance to show off his skills.

Hernando ATH Shawn Wade: Wade does a little bit of everything for the Tigers, playing both sides of the ball.  He has a single pass for seven yards and two rushing touchdowns on the offensive side.  On defense, Wade has 49 total tackles, five tackles for loss, and one sack.

Oxford DB Jack Gilliland: Unfortunately for the Chargers, Gilliland is still in concussion protocol from the Horn Lake game and will not be playing senior night.  So far in his career, Gilliland has two interceptions, one of which was a pick six earlier this year against Lafayette.

Coaching: There’s no need to get too fancy in a game like this for the Chargers.  The team and head coach Chris Cutcliffe need to stick to the basics and let the talent of their team win the game.

The Oxford Chargers are a better team than the Hernando Tigers, plain and simple.  Last time I made a statement like that in one of these, Oxford struggled against Lewisburg.  Let’s hope that doesn’t happen this time.  But, when it comes down to it, the Tigers have been losing to teams that Oxford has beaten by 45 points.  The Chargers get their ninth win on senior night 53-6.