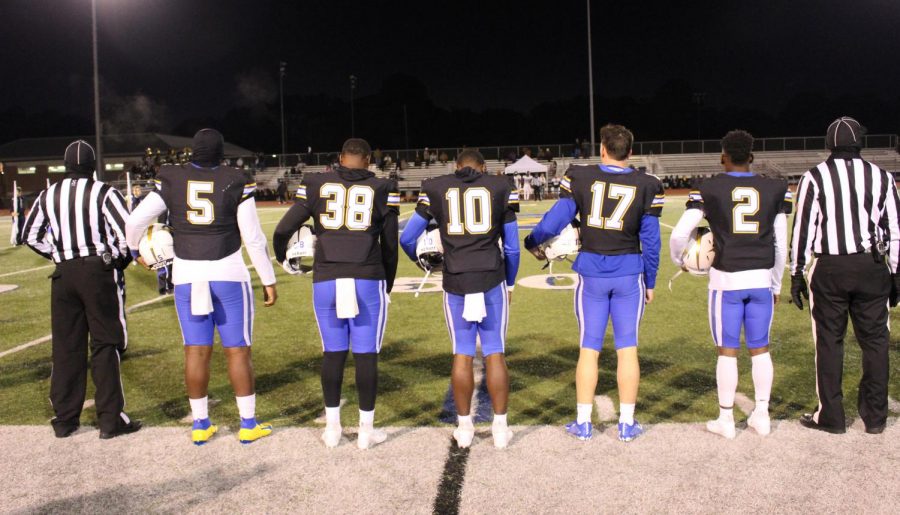 Seniors JJ Pegues, Kiyon Williams, Dude Person, John Meagher and Javian Gipson-Holmes line up before the coin toss for their game against Northwest Rankin, which the Chargers won 43-7. The Chargers held their senior night last week and won against Hernando with a score of 36-6.

In the penultimate game of the regular season, the Chargers will travel to the blue turf field of the Tupelo Golden Wave on Friday night. This matchup will decide the final ranking of the division, which Oxford currently leads. Last week, the Golden Wave overcame a comeback against defending 6A champions Horn Lake, winning 28-20. The Chargers won their senior night game against Hernando 36-6. Last year, the Golden Wave came to Oxford and were dominated by the Chargers 33-13.

Oxford ATH JJ Pegues: In the biggest games of the season, you need your best players to perform. While he may not have the stats that he had last year, Pegues has continued to be the most important part of the offense running the ball, catching and blocking. In last year’s game against the Golden Wave, Pegues did not play.

Tupelo WR Trip Wilson: Wilson has been a breakout player for the Golden Wave this year while replacing Jordan Jernigan. Wilson provides the juice on an offense that loves to throw the ball with quarterback Grayson Weir. Wilson, a Memphis University baseball commit, has 743 yards and eight touchdowns on the season.

Oxford DB Byron “Tank” Pearson: Throughout the game, more than likely, Pearson will be lined up against Tupelo’s two big receivers, Jaycob Horn and Trip Wilson. Both receivers are big time players for the Golden Wave, and Horn is even committed to play football at Ole Miss. Whoever he lines up against Friday night, Pearson will have his work cut out for him.

Tupelo DB Carson Rousseau: As a junior, Rousseau had a total of three tackles and one interception on the season. This season, the senior has 73 tackles, four interceptions and a fumble recovery. However, all four of his interceptions came in the Golden Wave’s 42-21 win over Hernando.

John Meagher: Meagher has to limit the interceptions and turnovers for the Chargers to win the game. Tupelo’s defense is not nearly as strong as Olive Branch, Horn Lake or even Starkville’s defense, so the Charger offense should be able to move the ball. But, if there are a multitude of turnovers from Meagher and the offense, it will be a struggle.

In their first six games of the season, the Golden Wave football team went an even 3-3, losing to South Panola, West Point and Olive Branch. Tupelo then went on to win the next four games, and are on a four game winning streak coming into the game Friday. Oxford, on the contrary, has “struggled” the past few weeks. While they have won eight games straight, the Charger offense has slowed down as of late, averaging 20 points a game over the past three weeks, compared to 36.5 the first seven games. But, even with Tupelo’s streak and the Charger’s offensive struggles, the visitors should spoil the host’s senior night on Friday. Chargers win 31-14.