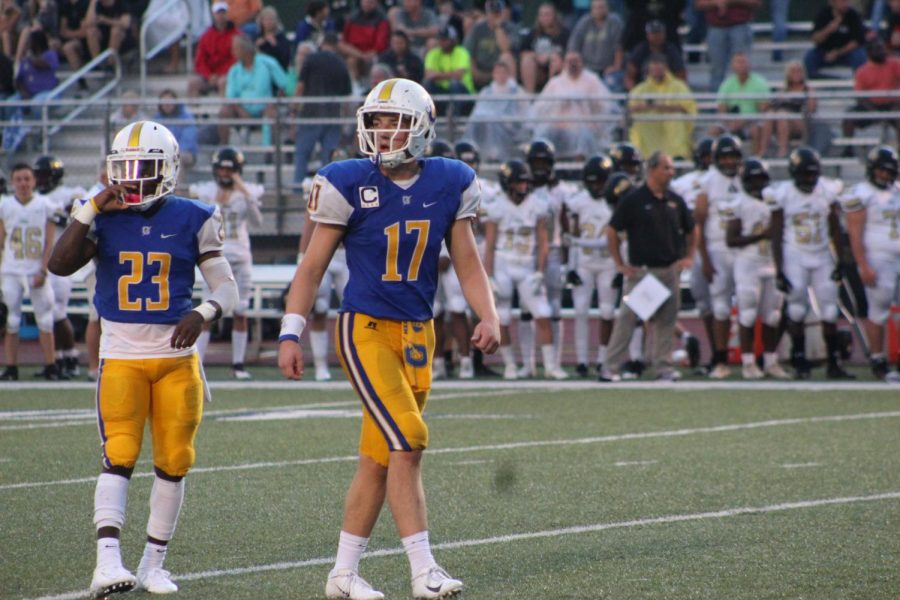 Seniors KJ Wadley and John Meagher look to the sideline during the Chargers' game against Northwest Rankin earlier in the season. This year, the Chargers have the second ever 6A playoff berth and will host Warren Central.

Oxford’s second ever 6A playoff berth will feature the Chargers hosting the Warren Central Vikings on Friday. The Chargers defeated division rivals Tupelo last week 14-3, while the Vikings were dominated by South Panola 35-6. In last season’s Red Carpet Bowl, the Chargers and Vikings faced off up until third quarter when the game was cancelled due to weather. The Vikings were up 14-6 at the time.

Oxford DB Scott Norphlet: Norphlet, who was recently named to the region 1-6A 1st team, is one of the best tackling defensive backs in the state. Norphlet is third on a very strong defense in tackles, with 75. Against a Viking that offense features some players with size, notably a 6’2, 277 pound tight end, Norphlet will have to make plays tackling.

Warren Central QB Parker Kivett: Kivett, a 6’4, 180 pound quarterback, has shown out for the Vikings in his senior season. He has 1487 passing yards on a 61% completion rate, along with just seven touchdowns. Look for Kivett to try and connect with wideout Demond Patton often throughout the game.

Oxford RB KJ Wadley: Over the past few weeks, the Chargers have not been able to get the passing game going. In turn, the trio of Meagher, Pegues and Wadley have had to carry the workload with their feet. Pegues had a big game last week on the ground, so I’m expecting Wadley to do the same this week, given that he gets enough carries.

Warren Central LB Darius Smothers: Smothers, a linebacker standing at 5’10 and 170 pounds, leads the Vikings with 93 total tackles on the season.  Along with the tackles, Smothers has 8 tackles for loss, two passes defended and three caused fumbles for Warren Central.

LB Tristan Shorter: Shorter, and really the whole linebacker corps for the Chargers, have been dominant this year.  Specifically Shorter has an uncanny ability to create huge plays for the Chargers on defense, such as his interception returned for a touchdown against Lafayette and his huge interception away at Olive Branch.  With the offensive struggles likely to continue into the playoffs for the Chargers, one of these big plays may be needed to secure a Charger victory.

This is somewhat of an odd matchup for the Chargers. This Viking team reminds me of Tupelo, but not as good on offense. They had potential to be a very good football team such as when they played Brandon to a 9-10 game, yet then went and lost to Pearl 42-0 and only beat Murrah 12-0.  Just like last year’s Game Day Previews with Walker Bailey, the Chargers are being slept on and underrated. In the Clarion Ledger’s playoffs predictions, writer Anthony McDougle doesn’t even mention Oxford while predicting who has a chance of winning 6A. I’m going with the Chargers in this game 20-7 and will keep sticking with them against whoever they play.