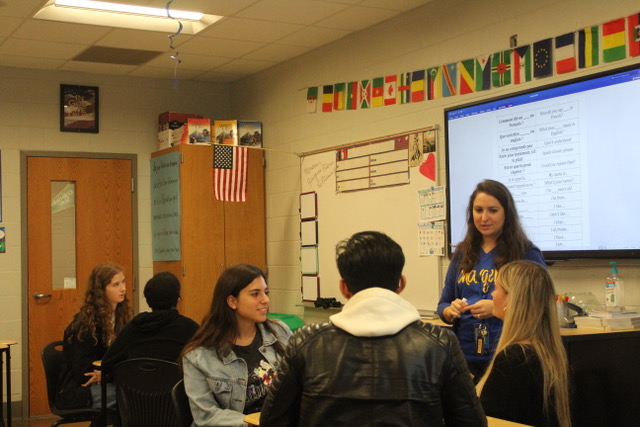 The OHS French Club returns after two years of inactivity with a few changes, including a new leadership team, a conversational group and a look at different cultures.

“French Club this year is going to be designed more engaging, more interactive,” French teacher Chelsea Winnick said. “We’re going to be learning about French speaking cultures from around the world, not just France, and do a lot more hands on, games, activities, arts and crafts, trying to get more students exposed to what it means to be a French speaker.”

The OHS French Club’s leadership was put together through an application process. Students submitted applications to their desired position, and each application was read blindly after identifying factors were taken out.

“I’m going to be working with a leadership team once we have all of our applications, and I’ll be kind of directing, throwing some ideas out, looking online at [what] other French teachers [are doing],” Winnick said. “[The leadership team] will still have a final say in what we do specifically, but I will kind of help guide them into which region we’re looking at or like certain activities or holidays that are coming up.”

According to Winnick, many students came forward showing interest in having the French Club put back together. French Club was initially put together two years ago but stopped meeting after more and more students became busy with other classes and other club activities and stopped showing up.

“My first year here, which would have been the 2017-18 school year, our first three meetings went really well; we had a lot of people. Everyone had really good ideas, but very, very quickly people just stopped showing up,” Winnick said. “It ended up just being myself and the secretary for three weeks in a row. We were the only people who showed up. I was just putting effort and energy and time into planning things, and then nobody would come in. It was a waste of my energy, and our poor secretary, it was a waste of her time. And, there was just so much going on with myself being a new teacher that it was more a hassle than it was worth for nobody showing up.”

Senior and French IV student Sophie Quinn was a part of the French Club two years ago and remembers some activities that the club did together.

“[French club two years ago] was fun. I don’t really remember much,” Quinn said. “The main thing I remember is we did a cheese tasting and that was really fun and an interesting way to learn about French culture.”

Quinn also plans partake in French Club this year as well to learn more about how French is used globally.

“I’m excited to learn about how French is used throughout the world, both in France and in other countries and French culture and how French has influenced other cultures,” Quinn said.

Sophomore and French I student Lorielle King, who is also a part of French Club, looks forward to seeing how France is different than the United States and believes the club will better prepare her should she ever go to France.

“I’ll probably gain an understanding of the culture,” Kind said. “If I ever go visit I’ll know what I’m expecting.”

The French Club takes place every other Friday during Flex, and on the alternate Fridays, Winnick says that a new French Conversational Group where students will “practice speak[ing] extemporaneously because that is what us as learners really struggle with: just having to sit down and speak to someone when they speak to you.”

“It will be specifically just to practice speaking French, so this one is more limited to people who have exposure to French who have been learning it, but my French I students are welcome to come and observe and listen, and maybe if they’ve got a few things that they’ve learned, they can jump in and say it, but this is really to get us practicing conversational French, and speaking can be difficult in a classroom setting where we have more people and things are more formal,” Winnick said. “Sometimes people aren’t so welling to converse specifically in the target language, so this conversation group is only for those who are willing to speak in French and practice speaking French and would like the opportunity to work on that a bit more in an environment with people who have the same goal.”

Winnick says that it’s not too late to join and hopes her students grow to love the French culture, other cultures and the French language more.

“I’d really like [my students] to gain a better appreciation for how widespread the French language actually is. I know in class and in pop culture we tend to think of French in France, but it’s really a global language, and it’s growing everyday,” Winnick said. “So, I’d really like them to experience and explore how French can be used in a wide variety of places, but also just have a place where people can get together and socialize and talk about things that they’re interested in, like common interests.”