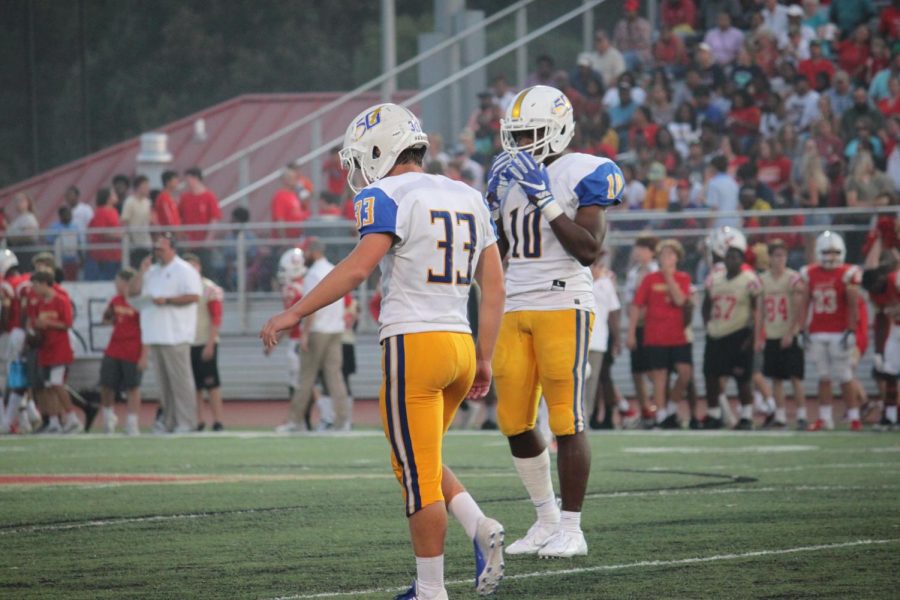 Junior Jack Tannehill prepares to kickoff against Lafayette earlier in the season. Tannehill is a perfect 36-for-36 on extra point attempts this season.

This year’s MHSAA 6A North Half Championship will feature the Oxford Chargers hosting the Starkville Yellowjackets for another edition of “The Little Egg Bowl,” a day after the Mississippi State Bulldogs won the real Egg Bowl. The Yellowjackets dominated Olive Branch last week in a 20-3 win. The Chargers defense was up to the task against South Panola, helping the team win 17-7. Earlier in the season, Starkville beat the Chargers in Starkville 45-17.

Starkville WR Rufus Harvey III: I put Harvey as a player to watch the last time these two matched up, and he certainly was one to watch. He had 62 yards and a touchdown rushing, as well as eight catches for 99 yards through the air. On the season, Harvey has put up some incredible stats with 1012 yards and 15 receiving touchdowns.

Oxford DB Byron “Tank” Pearson: Defensive miscues and too-late adjustments in the secondary killed the Chargers in August. Pearson, who set the Oxford Charger record for most interceptions in a season with eight, will have to play well and lead this secondary on Friday if the Chargers want to win.

Starkville QB Luke Altmyer: In just his junior season, Altmyer has thrown for 2,885 yards and 35 touchdowns, with just four interceptions. In comparison, John Meagher has 1,484 yards, 14 touchdowns and nine interceptions. In August’s matchup between these two, Altymer threw for 339 yards and three touchdowns.

Oxford K/P Jack Tannehill: Be on the lookout to see if Tannehill, an Ole Miss commit, can hit a 35-yard kick.

Coaching: In the matchup earlier in the season, it just felt like the Chargers got out-coached by Starkville. Defensive adjustments were made too late in the game after Oxford was already down multiple scores, making a complete comeback unlikely. The Yellowjackets and Altmyer relied on screen passes to get yards throughout the whole first half, with the Chargers not making the proper adjustments in time. While the two teams match up pretty evenly on both sides of the ball, coaching will be crucial in deciding the winner of this huge game.

45-17 is not an accurate representation of how the first matchup went. The game was very close late into the fourth quarter, and Starkville got multiple touchdowns in garbage time, widening the gap.  This time around, Oxford’s defense is completely different and has been dominating almost every team they come up against. Last week, Dandy Dozen member Janari Dean was held by the Charger defense to just 37 yards on 20 carries. In addition, the Yellowjackets are much stronger at home than they are on the road, with their only two losses this season coming when they were away from home. Like usual, Oxford is being slept on and are the underdogs coming into this game. And, like usual, I’m picking Oxford to win 17-14.