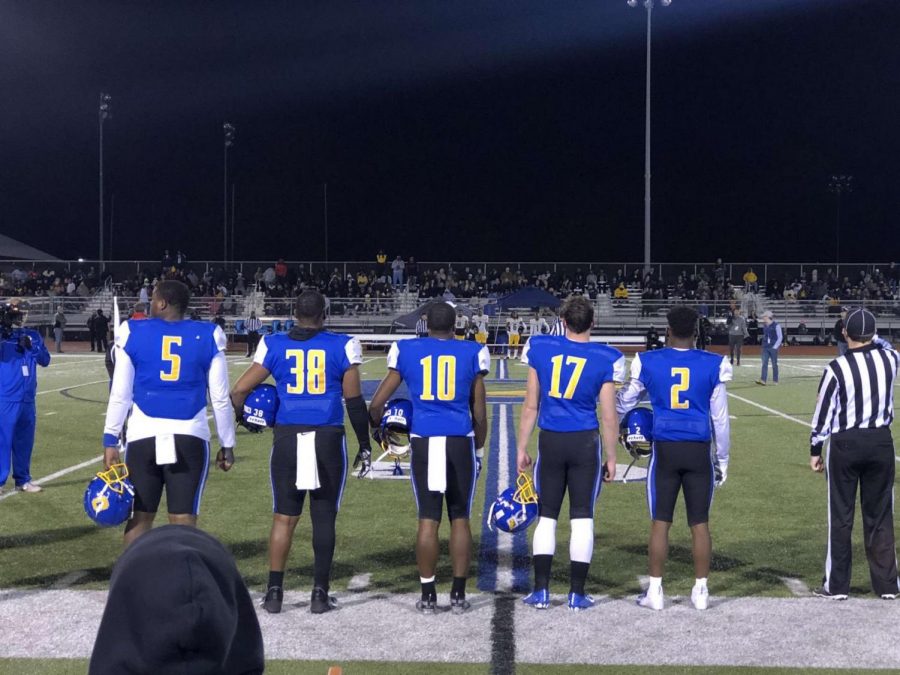 Seniors JJ Pegues, Kiyon Williams, Dude Person, John Meagher and Javian Gipson-Holmes line up before the coin toss for their game against Starkville. The Chargers won the game 25-16 and will play the Oak Grove Warriors in the 6A State Championship.

For the first time since 2015, the Oxford Charger football team is going to the state championship. The Chargers defeated the Starkville Yellowjackets 25-16 in the game for the North Half.  In the previous rounds, Oxford beat out the Warren Central Vikings and the South Panola Tigers.

As it has been all season, the Charger defense showed out. On Starkville’s very first drive the ball was snapped over quarterback Luke Altmyer’s head with the Charger defense pouncing on it for a touchdown. Long snapper Kortlen Wilfawn then caught a pass for a 2-point conversion, putting the Chargers ahead 8-0 early in the first quarter.

After a big defensive stop with two sacks, it was the offense’s turn to show off what they can do. With good field position after a Yellowjacket punch, John Meagher ran it in from 20 yards out for the Charger touchdown. With just nine minutes gone, Oxford was up 15-0. The final score from Oxford came from kicker Jack Tannehill. Tannehill hit from 42 yards out to extend the lead to 18-0.

The turning point in the first half was when, in the second quarter, a for sure touchdown pass was dropped by Oxford receiver DK Johnson. The Yellowjackets then took over and drove down the field, scoring on a touchdown catch by Joshua Aka. The Starkville defense stood strong when they went back on the field and forced a punt by Tannehill, which they blocked. The ball went out the back of the end zone and the lead was just 18-9 for the Chargers. And finally, at the very end of the half, things went from bad to worse for Oxford. Altmyer connected with star wide receiver Rufus Harvey on an 18-yard touchdown to make it an 18-16 game going into the half.

Once the second half started, the momentum shifted again. Tannehill kicked and recovered an onside kick from the kickoff. While the possession didn’t amount to any points, the play signaled a change in momentum for the rest of the game.

With four minutes left in the third quarter, Johnson was able to redeem himself. Meagher hit Johnson on a third down slant for the 15 yard score, which would ultimately be the last points of the game. The Charger defense took things into their own hands and closed things out in the fourth quarter. Defensive back Scott Norphlet intercepted Altmyer on the goal line, preventing the Yellowjackets from getting any points in the red zone. After one more stop, Meagher and the offense were able to get into victory formation and seal the victory, 25-16.

Oxford will be facing the Oak Grove Warriors in the state championship in Hattiesburg. The winners from the South have a record of 11-3 on the season and upset the Petal Panthers 35-28 in overtime.