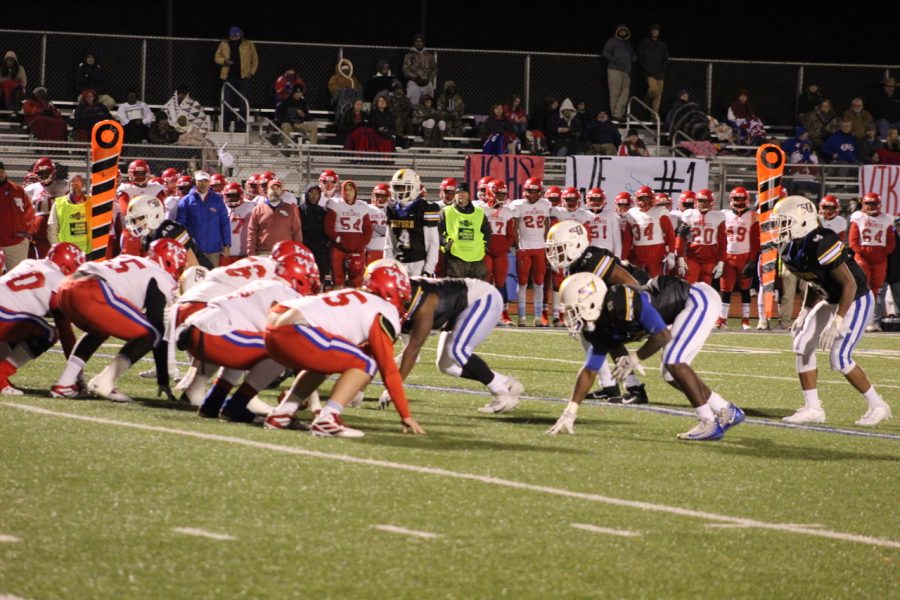 The Chargers' defense lines up against the Warren Central Vikings. The Chargers traveled to Hattiesburg to play in their first 6A Championship game.

The Oxford Chargers and Oak Grove Warriors are facing off in the 6A MHSAA State Championship game in Hattiesburg. Oak Grove will get to stay home for this championship  whereas the Chargers will be making a four hour drive down south for the game. Oak Grove won an overtime thriller against Petal 35-28 last week while Oxford beat out Starkville 25-16.

Oxford QB John Meagher: Meagher does not need to throw for 300 yards and four touchdowns for the Chargers to win, while that would obviously help. He needs to control the game with the run game on reads and limit turnovers, like he has done the last few games. In the last two playoffs games against South Panola and Starkville, he has thrown for just 99 yards, showing that Oxford doesn’t have to throw to win.

Oak Grove QB Damon Stewart: At the beginning of the season, Stewart was a relatively unknown transfer from Georgia tasked with replacing John Rhys Plumlee for the Warriors. Stewart fit in nicely in Plumlee’s absence, amassing over 3,300 total yards and 46 total touchdowns. The 6’1, 175 pound senior has, arguably, been the best quarterback in the state this year.

Oxford DB Scott Norphlet: Oak Grove and Stewart excel in the passing game. Norphlet and the other defensive backs for the Chargers will have a tough time covering the Warrior’s talented receivers. Stewart also has a very strong arm, which Norphlet will have to make sure to be wary of as he plays deep in coverage. Last week, Norphlet had a clutch interception on the one-yard line to help win North Half.

Oak Grove WR Tavion Smith: Smith, physically, is much larger than a somewhat small Charger secondary. He is 6’4 and has 848 receiving yards this season, along with 13 receiving touchdowns. Whatever defensive back he matches up against will present a mismatch in favor of the Warriors.

Oxford ATH JJ Pegues: The Chargers, on offense, have relied on Pegues throughout this playoff run. There’s not much else to say except that Pegues will be fed the ball and, if he isn’t contained by the defense, Oxford will likely win.

Oak Grove DL Graham McCarty: Standing at just 5’10, 185 pounds, McCarty is undersized for an interior defensive lineman. While undersized, McCarty uses his speed and his jump off the snap to beat out bigger offensive linemen. Luckily for Oxford, they have fared much better against defensive lines that are on the smaller side.

Who wants it more: Last year, Oak Grove lost this same exact game to Horn Lake and many of those same players are back in this year’s game. These Chargers watched, while in middle school, the high school team lose the 5A state championship game three years in a row.  The players that want this game more and put everything out there on the field are the ones that are going to win it for their team.

Outside of Oxford, not many sports writers or people in Mississippi believed in this Charger squad. Somehow a team loaded with seniors on defense, a senior quarterback and debatably the best player in the state was slept on all season and has proved everyone wrong up until now. And finally, once again, the “experts” are picking against the Chargers again. Pegues and Meagher are going to pound away at an average Warrior run defense and the Charger defense is going to do what they’ve done all season. Chargers win 33-20.