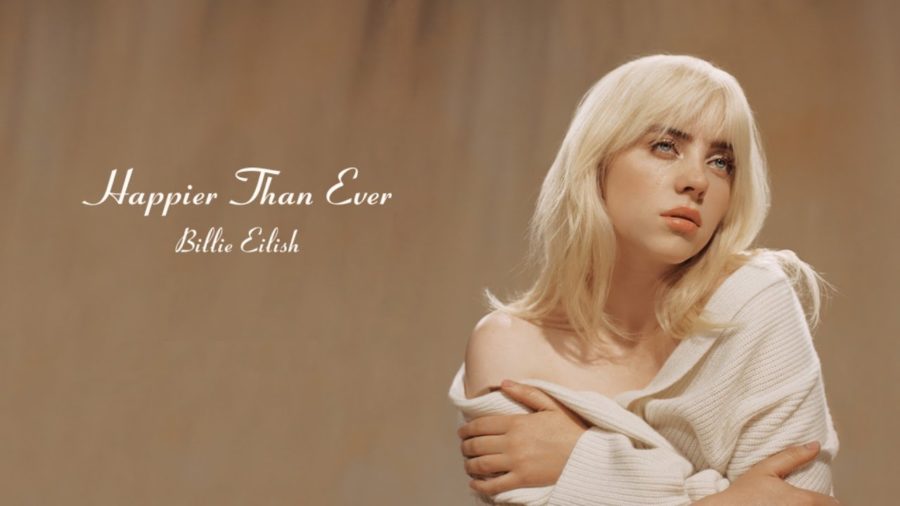 This entertainment article was originally published in Volume 41, Issue 1 of The Charger.

Billie Eilish has become a pop icon over the last five years. She started singing in her church’s choir when she was eight years old, and soon after started writing songs. The first song she published, titled “Ocean Eyes”, was originally posted on SoundCloud, but it soon became an instant hit. Her new album, however, has sparked controversy on social media for the singer.

The album was a complete departure from her prior music. The change wasn’t completely sudden, she released songs like “everything i wanted” and “my future” that were very downbeat and different from her 2019 album, “When we all fall asleep, where do we go?” She has stated several times that her new album was inspired by older music, on her Instagram she posted that the cover was a “direct ode to” Julie London’s “make love to me” album cover from 1957.

Happier Than Ever was announced during April, with a release date set for July 30. On Billie’s Instagram, she said that she started production on the album April 1 of 2020, and finished it on February 16, 2021. The album has 16 songs, with a 56 minute run time.

She released five songs off the album before it dropped. “NDA” sparked the most controversy, with it leading many to call Billie’s new music her “flop era”. A lot of people also pointed out the similarities between the song and the theme from the popular video game Among Us. Billie did not take these insults lightly. On TikTok she posted a video to the sound, mocking her haters. In the video she said, “is it just me or is billie in her flop era like why does she suck now…” with the caption saying “literally all I see on this app… eat my dust my t*ts are bigger than yours.” Another complaint from fans comes from Billie’s excessive use of auto tune on the album. Billie hasn’t spoken on it, but on social media some fans defend her with statements such as “Autotune is an art form,” or “The fans that don’t like her new music were never real fans anyways.” Many fans have spoken out on social media about how they are disappointed with how Billie Eilish is dealing with the situation. This displeasure evident by some of the comments under her posts, one of the commenter wrote “Billie, why not sit down and take the time to address the situation because I’m getting annoyed by these distraction posts.”

With over 60 million streams and 20,000 album sales before the second week after the album dropped, it rose to the top of several charts, including Billboard and Rolling Stone’s top 200 albums. This exceeded expectations for the artist, and surprised skeptical fans. The most popular song on the album is “Happier Than Ever,” which became an instant hit. Within the first couple of weeks from its release it went viral on TikTok, with almost 90 thousand videos under the original sound.

Now that the entire album has been released, many fans that stopped supporting Billie during the “NDA” controversy have begun supporting her again. The comments on her posts have quickly become positive, and little critique on the artist’s new album has been in the press. Some long term fans that have supported the artist throughout recent controversies are calling people who commented negatively on Billie and now support her “fake fans.” One commenter said “The energy switch in the comments is so funny.”

In the end, most people have forgotten about the controversy and still support Billie. If you scroll far enough in the comments of any post of hers, you will always find someone who has something negative to say. Every artist goes through controversies, but usually they will continue to do what they love doing. In this case, Billie’s career doesn’t seem to have suffered much, and she continues to make music in whatever style she pleases.