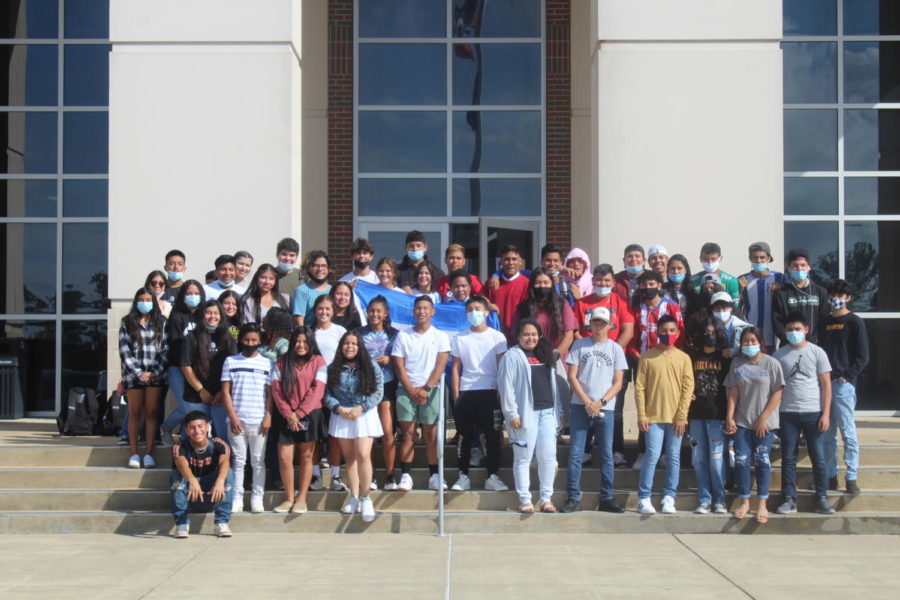 This news article was originally published in Volume 41, Issue 2 of The Charger.

National Hispanic Heritage Month, spanning from September 15 until October 15, is celebrated to acknowledge the culture and history of the United States Latino community. Year to year, the paramount theme of the month differs, but in 2021 the theme is “Esperanza: A Celebration of Hispanic Heritage and Hope,” which emphasizes a futuristic outlook and hope for the Hispanic population.

At Oxford High School, there are currently 77 kids with Hispanic heritage. While many of these kids were unaware of this month prior to this year, EL teacher Tuesday Arizaga got an immediate reaction after explaining what all it entailed and how this was an important month to celebrate and participate in.

“It’s something they were all kind of proud of, they were all for doing this and they wanted to represent their countries but also show that they want to be American citizens and want to be a part of our community.” Arizaga said.

While the whole month of September is the United States Hispanic Heritage Month, the days in which Central America actually celebrates do not align with our set days, EL teacher Charlie Winnick explains.

“September 15th is the day of independence for most of Central America, like Honduras, El Salvador, Guatemala. All the Central American countries got independence September 15, then Mexico as well. The Spanish colonies started to gain independence within those days. Some kids were saying that when the schools have done anything for it it was in September, so they were confused why we were doing it throughout the month.” Winnick said.

Participation and awareness of this month is crucial to spreading knowledge of Hispanic culture and heritage across the United States. Winnick mentions some of the reasons why participation is so key.

“It celebrates the diversity of the country and helps show the importance of all the hispanic population and how you can be hispanic and American and don’t have to lose your identity and both sides of them can be celebrated.” Winnick said.

Oxford High School has 5 Central American countries represented currently in the school. The dynamic between those from different countries who don’t speak English as their first language is quite unique and portrays a family feel, Arizaga explains.

“The [Central American] countries that are represented are Guatemala, Mexico, El Salvador, and Honduras while we have a few students from Spain and other non-spainsh speaking countries. A lot of our students who are not hispanic have picked up a lot of Spanish, and they are able to have conversations by being around and hearing these kids. They are a very close group.” Arizaga said.

Many of these students have moved from their home country to the United States recently and have been put into an environment where they are given no option but to quickly adapt. OHS senior, Hamilton Cabrera, talks about graduating in May despite the experiences and struggles he has faced.

“This is my first time graduating so I feel excited, there weren’t a lot of people that graduated before and where we are at right now is good. I can set an example.” Cabrera said. “I didn’t know English when I came here, it was difficult for me. Some classes that are in my country are different here and language is different too. I am from Guatemala and I came over here 5 years ago. I learned English in 2 years, not very well but yeah.”

Cabrera also emphasized the importance of school and how it can make a big difference in one’s life.

Another EL student, Yossy Zelaya Juarez, is from Honduras and talked about his life and transition regarding his move to the United States years ago.

“I come from Honduras, it’s in Central America and it’s one of the poorest countries, some people come to the US for the economy because our economy is bad or some other people come here because they have drug problems or somebody’s trying to kill them” Juarez said. “But the reason why my mom brought me here is because she wanted a better education for me so that I can be somebody and I don’t have to work everyday like her.”

As mentioned earlier by Arizaga, the tight-knit community contributes tremendously to the environment and strive behind these teenagers’ goals. Juarez mentions his personal experience regarding his peers’ influence on his schooling.

While Juarez had no prior knowledge of Hispanic heritage month until it was mentioned, he is proud of not only his home country but also of how far he has come and the life improvements he has made. Juarez shares his biggest words of advice in hopes that others will follow.

While the work barrier often provides difficulty in graduating, much improvement has been seen as students start to realize the value of education. Arizaga talked about the accomplishments of students like Juarez and why it is such a big deal foe him to be graduating in December and reaching this milestone.

“He will be the first to graduate in his family. He’s one out of 8 children. He will be graduating early in December.” said Arizaga.