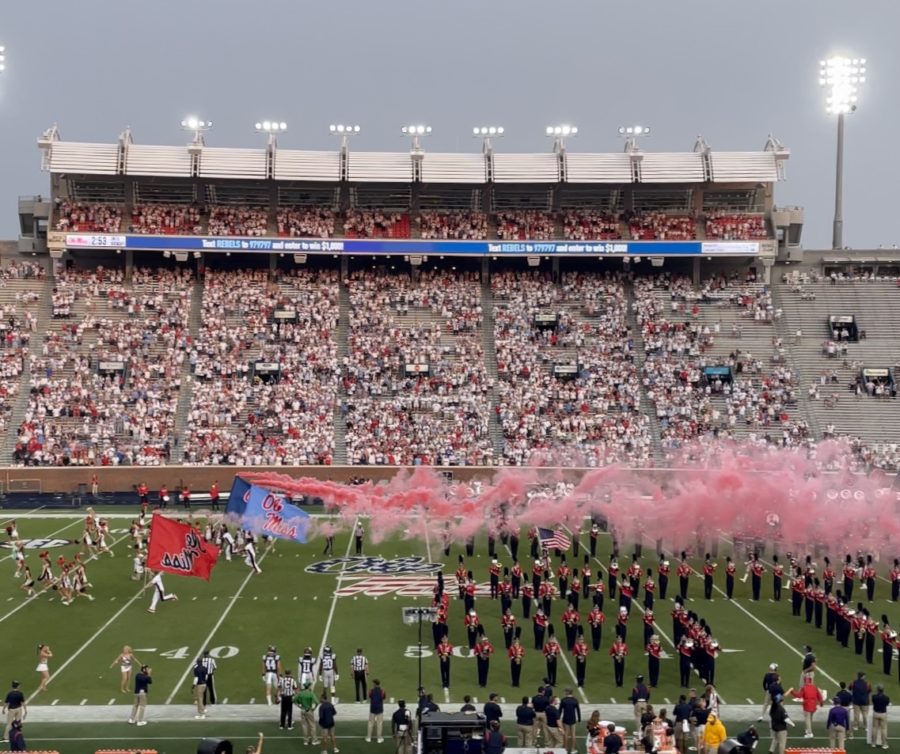 The Austin Peay Governors played at Vaught-Hemingway Stadium against the Ole Miss Rebels on September 11, 2021. The Rebels won 54-17.

Ole Miss (1-0) defeats Louisville (0-1) on opening weekend in Atlanta.
The Ole Miss Rebels football team opened up their 2021 campaign against the Louisville Cardinals. The game was played in Atlanta at the Mercedes Benz Stadium, the home of the Atlanta Falcons. It was the Chick-Fil-A Kickoff game on Labor Day Monday. Both teams were unranked in the preseason and were coming into the first game of the season.

The Rebels lived up to their hype after going down the field and scoring a touchdown on an 11-play, 94 yard drive capped off by a one yard touchdown run by running back Jerrion Ealy. The Ole Miss offense would capitalize on their next 3 of 5 drives, scoring two touchdowns and a field goal to close out the half. The defense forced two turnovers by the Louisville offense, one interception and one fumble. The Rebels led after the first half by a score of 26-0.

#20 Ole Miss (2-0) defeats Austin Peay (1-1) in their home opener in Oxford.
The Rebels would return to Oxford to face the Austin Peay Governors in their first home of the season. Ole Miss would jump into the AP Top 25 poll at #20 in week two after a dominant showing in the opening week against Louisville, whom they defeated 43-24.

The Rebels picked up where they left off in Atlanta and would march down the field and score a touchdown on a 10-play, 80 yard drive finished off by a one yard touchdown pass from Matt Corral to wide receiver Dontario Drummond. The Ole Miss defense would be the big factor in the first half, only allowing the Governors to score 7 points in the first half. The defense forced the Austin Peay offense to turn over on downs twice along with a strip sack that led to a 33 yard scoop and score by star defensive lineman Sam Williams.

The second half offense scored quickly and put the game away early, but there was still a lot that needed to be cleaned up. The Governor defense would force a fumble from running back Snoop Conner and stopped the Rebel offense on a fourth down to force a turnover on downs. In the fourth quarter, the Rebels only points would come on a 26 yard field goal from Kicker Caden Costa. The Rebels would defeat Austin Peay, 54-17.
Ole Miss Team Leaders:
Corral (QB): 21/33, 281 yards, 5 TDs, 8 carries, 35 yards
Parrish Jr. (RB): 8 carries, 72 yards
Drummond (WR): 6 receptions, 102 yards, 2 TDs
Williams (DL): 5 total tackles, 2 sacks, 2 TFL
Costa (K): 7/7 XP, 1/1 FG (26 yarder)

#17 Ole Miss (3-0) defeats Tulane (1-2) heading into bye week.
The Rebels would stay in Oxford to face the Tulane Green Wave for their second home game of the season. Ole Miss would climb up the AP Top 25 poll to #17 after week two after another dominant showing in week two against Austin Peay, whom they defeated 54-17.

The Ole Miss offense showed no signs of slowing down, opening the first half by scoring on six of their eight drives. The only two drives the Rebels would not score on would be via fumble and turnover on downs close to the end of the half. The first drive of the game set the tone with an 11-play, 75 yard drive ending with a 19 yard touchdown run by running back Henry Parrish Jr. The Ole Miss defense would start out strong but would end the first half struggling, allowing the Tulane offense to score three touchdowns and close the gap at 40-21 going into halftime.

The second half offense would put the game away, scoring touchdowns on each of their first three drives coming out of halftime. The Rebel defense would pick back up after a sloppy showing to end the first half, not allowing the Green Wave offense to score in the second half. In the fourth quarter, the Rebels would go quiet and punt the ball following every offensive possession. Ole Miss would cruise against Tulane, winning 60-21.
Ole Miss Team Leaders:
Corral (QB): 23/31, 335 yards, 3 TDs, 13 carries, 68 yards, 4 TDs (7 Total TDs)
Ealy (RB): 15 carries, 103 yards
Mingo (WR): 6 receptions, 136 yards, 1 TD
Campbell (LB): 8 total tackles, 2 sacks, 1 TFL, 1 QB Hurry
Costa (K): 7/8 XP, 0/1 FG (54 yarder)

#1 Alabama (5-0) dominates #12 Ole Miss (3-1) in Tuscaloosa.
Coming off their bye week, the Rebels would travel to Tuscaloosa to face the Alabama Crimson Tide for their first away game of the season. Ole Miss would climb up the AP Top 25 poll to #12 in week four after another dominant showing in week three against Tulane, whom they defeated 60-21.

The highly anticipated Ole Miss offense showed no signs of slowing down after their dominant showing against Tulane. The Rebel offense would come to a screeching halt against Alabama, being shutout in the first half. The first drive of the game looked promising with the Ole Miss offense marching down the field and converting on fourth down twice. The Crimson Tide defense would hold strong by stopping the Rebels on 4th and 1 on the 5 yard line. The miscues wouldn’t stop in the first half as the Rebel offense would turnover on downs two more times and quarterback Matt Corral would be stripped on a sack. The Ole Miss defense couldn’t stop the Alabama offense, allowing the Crimson Tide offense to score four touchdowns and lead 28-0 going into halftime.

#17 Ole Miss (4-1) defeats #13 Arkansas (4-2) in offensive shootout.
The Rebels hosted the Arkansas Razorbacks in a game that would be a highly anticipated test of the Ole Miss’ high scoring offense against a very talented Razorback defense. Ole Miss would drop in the AP Top 25 poll to #17 after week five in an ugly game against the Alabama Crimson Tide, as they were destroyed 42-21.

The Arkansas offense would open up the scoring with a touchdown on an 82 yard drive and would score on back to back possessions. Ole Miss would get a touchdown in between the scoring and Arkansas would lead 14-6. The Rebels would score on their next 3 of 4 possessions along with a fumble, missed field goal, and interception from the Arkansas offense. The Ole Miss defense shut down Arkansas QB KJ Jefferson in the first half after the two scores, and the Rebels would lead 21-14 going into halftime.

The second half offense for both sides would open up dramatically with a total of 68 points scored in the second half alone. The Rebel offense would get three second half touchdowns on the ground with long runs from RB Snoop Conner. Arkansas would counter with QB KJ Jefferson throwing for two touchdowns and running for two more touchdowns to keep the game in a back and forth affair. With 1:07 left on the clock in the fourth quarter, Ole Miss QB Matt Corral would fire a 68 yard touchdown pass to a wide open Braylon Sanders for a touchdown to put the Rebels up 52-45 with a minute to go. Arkansas QB KJ Jefferson would put the Razorback offense on his back, leading them 75 yards in a minute and capping the drive off with a touchdown to only be down by one point, still needing the extra point to tie the game. Arkansas would elect to go for two and ultimately miss the conversion, ending the game with the Ole Miss Rebels winning 52-51.
Ole Miss Team Leaders:
Corral (QB): 14/21, 287 yards, 2 TDs, 15 carries, 94 yards, 2 TDs (4 Total TDs)
Parrish Jr. (RB): 18 carries, 111 yards
Conner (RB): 12 carries, 110 yards, 3 TDs
Sanders (WR): 2 receptions, 127 yards, 1 TD
Campbell (LB): 9 total tackles, 1 sack, 1 TFL, 1 FF, 1 FR
Costa (K): 5/6 XP, 1/1 FG (50 yarder)

#13 Ole Miss (5-1) defeats Tennessee (4-3) in Lane Kiffin’s return to Knoxville.
The Tennessee Volunteers hosted the Ole Miss Rebels in a game that would be a highly anticipated test of high scoring offenses. The total projected scoring in the game would be projected at 82 points. Ole Miss would rise in the AP Top 25 poll to #13 after week six in a back and forth offensive shootout against the Arkansas Razorbacks, pulling out a 52-51 win on the final play of the game.

The special teams unit on both sides of the ball would start the game off with the scoring. Ole Miss would recover a Tennessee muffed punt on the first drive of the game. Ole Miss would get a touchdown after taking over to take the lead 7-0. Tennessee would soon grab a safety after pressuring Matt Corral in his own end zone to make the score 7-2. The Volunteers would score on their next offensive possession to go up 9-7. The Rebel offense sparked by scoring on three straight offensive drives and Tennessee would sneak a field goal to end the first half. The Rebels would lead at halftime, 24-12.

The offenses on both sides of the ball would open up the second half with five straight possessions with a score. That would take up the entirety of the third quarter with Ole Miss leading 31-26. The fourth quarter would feature no scoring, something you rarely stop out of the Ole Miss offense. Ole Miss quarterback Matt Corral would also surrender his first interception of the season, and get injured in the following possession. The Volunteers slowly tried to claw their way back into the game but would get stopped on their final possession of the game after a controversial ruling by the officials on fourth down. The Volunteers faced 4th & 24 with 54 seconds remaining in the game and would pick up 23 yards on the play, with the receiver being ruled down just short of the first down marker. The officials would seem to get the call right on the field, but the fans of Tennessee did not approve. The game would be delayed for twenty minutes as fans threw trash onto the field, which would hit and endanger members of the Tennessee cheer team, Ole Miss football players, and Ole Miss head coach Lane Kiffin. Kiffin would be hit with a golf ball thrown from the stands. The Rebels would get the last laugh in Knoxville, leaving with a narrow 31-26 win and improving to 5-1.
Ole Miss Team Leaders:
Corral (QB): 21/38, 231 yards, 2 TDs, 1 INT
Corral (QB): 30 carries, 195 yards
Drummond (WR): 2 receptions, 66 yards, 1 TD
Robinson (LB): 14 total tackles, 2 sacks, 5 TFL
Costa (K): 4/4 XP, 1/2 FG (30 yarder)