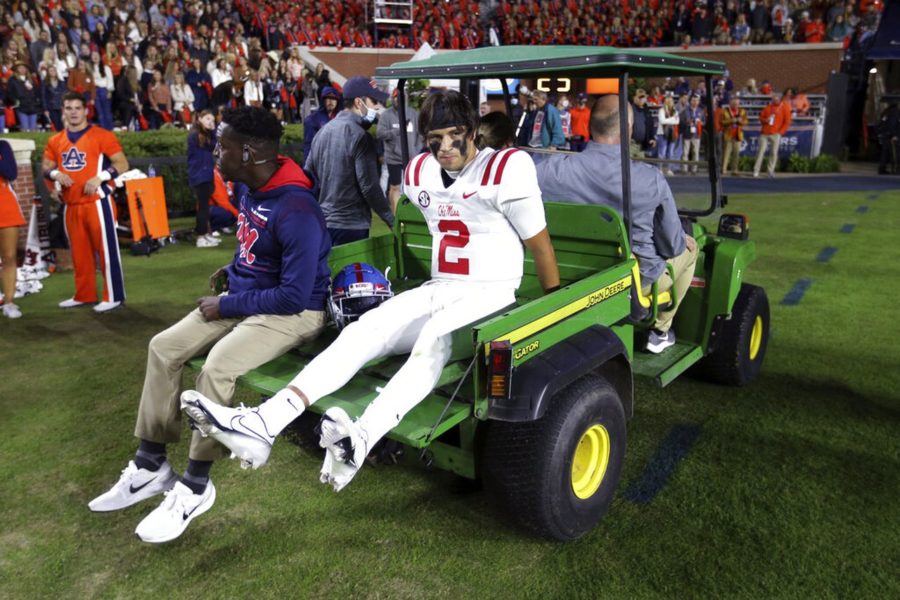 The Auburn Tigers would host the Rebels in which they would take the early lead and never look back. The Ole Miss offense was struck with the injury bug, losing another top receiver and the injury of Heisman front runner quarterback Matt Corral in the contest. The Rebels have now lost 3 offensive receivers and are dealing with another injury to their star quarterback.

The Tiger offense would open the game with back to back touchdown drives along with an Ole Miss field goal in between the scoring. The Rebel defense looked helpless in the first half, allowing Auburn to score a touchdown on 4 of 5 offensive drives. Auburn did not score on only one drive in the first half. Ole Miss would lose starting quarterback Matt Corral to a foot injury early in the contest. Corral has been dealing with an ankle issue for weeks, dating back to the game in Knoxville against Tennessee. The Ole Miss quarterback would be carted off the field, only to miraculously return to the game later in the second quarter when all seemed lost from the Ole Miss offense. Corral would check back into the game and lead the Rebels down the field on a 15 play, 88 yard drive to score the team’s first touchdown of the game on a run by running back Snoop Conner from 12 yards out. Corral would score a rushing touchdown on the next offensive possession for the Rebels. The defense could not hold back the Tigers, and Auburn would lead at halftime 28-17.

The second half would only see a field goal each from both teams. The Auburn offense would miss a field goal to open up the second half followed by a muffed punt. Ole Miss would fail to convert on the Auburn miscues, punting deep in their own field and failing to convert on fourth down on the Auburn 27. The Rebels would turnover on downs twice deep in Auburn territory instead of kicking possible field goals to bring the score closer. On a late drive by the Rebel offense, knocking on the doorstep of the Auburn end zone, quarterback Matt Corral would throw a devastating interception that would end the drive. That would only be Corral’s second interception of the year. This would ultimately end Ole Miss’ hopes of mounting any comeback, and the Auburn Tigers would go on to defeat the Rebels 31-20.