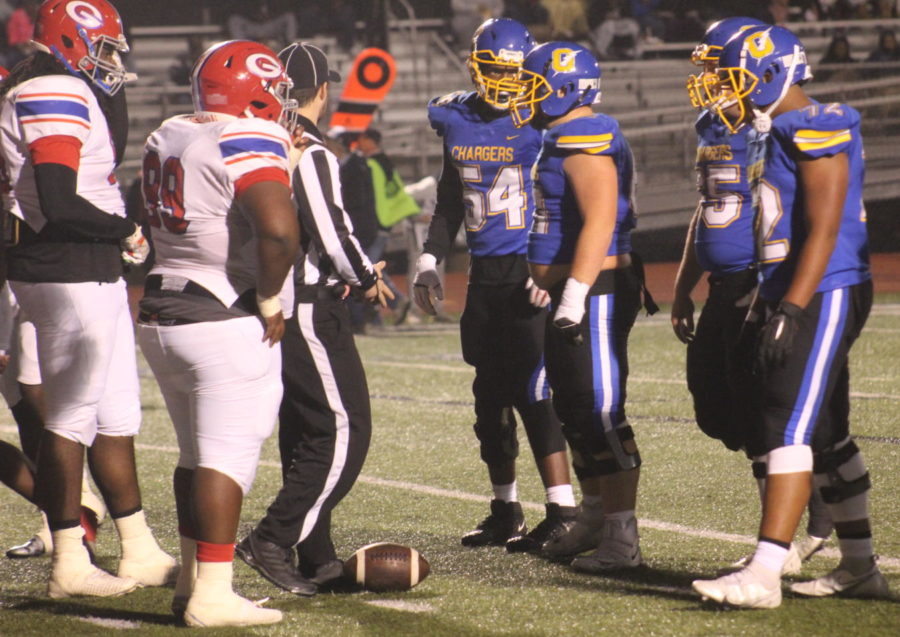 The Oxford offensive line prepares for a play against Grenada on October 29, 2021. The Oxford Chargers beat the Grenada Chargers 19-17.

With the 19-17 win against Grenada, Oxford is now 7-3 on the season. The Chargers travel to Madison Central tonight at 7 pm. The Jaguars are 8-1 on the season.

Oxford RB Roman Gregory: 5’10” 180 lbs junior for Oxford. This season, Gregory has a total of 850 yards. He has a total of 13 touchdowns on the season. With Gregory’s vision and ability to squeeze through a defense, Gregory will be a tough player to stop against Starkville.

Oxford LB Demonte Mitchell: 6’0” 230 lbs senior for Oxford. This season, Mitchell has a total of 84 tackles with 52 solo and 32 assisted tackles. Mitchell has 9 tackles for loss on the season and is looking for more tonight.

Oxford’s defensive backs: Oxford has a great group of DBs, but Madison Central loves to keep the ball moving. Previously, Madison Central has been throwing the ball more than running. The Jaguars have a good group of players who pass and catch the ball. The X Factor for this game will be Oxford’s linebackers tackling the run game.

Coming off of a home win, the Chargers need a road win to get a good chance to host playoffs. I am excited to see what the Chargers bring to the table tonight as Madison Central is a good team. 22-12, Chargers.