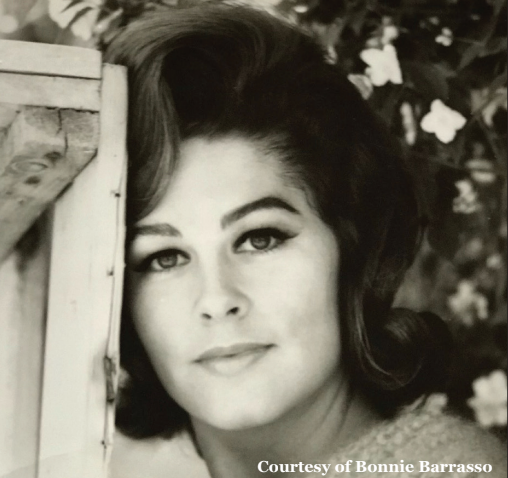 Bonnie Bunkley Barrasso was just 17 years old when she walked into Graceland and met Elvis Presley for the first time. Now at the age of 81, Barrasso remembers it like it was yesterday.

Asked to accompany her music teacher to secure an autograph on a teddy bear for a school fundraiser, Barrasso had no idea they would actually be meeting Presley in person.

“I hear you make records,” Barrasso said to Presley, when she met him. “He told me to quit playing games and that he was a ‘regular guy’.” Barrasso responded, “Good, because I’m a regular girl.”

Presley asked her out on a date for that same evening. They drove around Memphis in the back of his limousine. Barrasso and Presley were together on and off for approximately three years.

“Elvis and his whole entourage had the whole penthouse on top,”Barrasso said. “My mom and I had a suite downstairs. We stayed on set with him for three weeks. Juliette Prowse (the actress opposite Elvis in G.I. Blues) referred to me as ‘Elvis’ little lady friend’.”

Barrasso would go with Presley and spend time at Graceland. According to Barrasso, the “jungle room” did not exist when they dated. Many things at Graceland changed once Priscilla moved in. Many other areas in the house were renovated.

“Those stables that are there now were not there and that backyard didn’t look like that when I
visited there,” Barrasso explained.

According to Barrasso, Presley loved to rent out the Memphian movie theater for all of his friends.

“We watched many movies, never any of his,” Barrasso said. “He loved to rent the entire fairgrounds where we endlessly rode the Pipen and the Dodgem cars. He went out occasionally to Chenaults for pizza with his guys. He loved to ride his motorcycle and we would go to McKellar Lake a lot. He always teased me saying it was because I was ‘Miss McKellar Lake 1958’. When I won Miss Tennessee, he sent me a huge bouquet of flowers to congratulate me.”

Barrasso also remembers how Presley had a short fuse. He never directed his anger towards her, but he had a bad temper. She recalls hanging out with Presley in the pool room during one visit to Graceland, where he broke two television sets with a pool stick.

She and Presley broke up for good when Presley moved his future wife Priscilla into Graceland. According to Barrasso, Presley had promised Priscilla’s father that he would take care of her and move her into Graceland.

She (Barrasso) told him that she could not be with him if he was going to move her in.

“I was in California and he kept asking me to stay an extra week, I couldn’t figure out why he didn’t want me to go back to Memphis,” Barrasso said. “I found out it was because he was moving Priscilla into Graceland.”

Barrasso met Priscilla at one point in a hair salon.

“They had just finished teasing my hair to the heavens, ya know we had beehives in those days,” Barrasso said. “Just as they finished up, in walks Priscilla and there I was looking crazy. She said ‘you must be Bonnie Bunkley and I said you must be Priscilla, I’ve heard a lot about you.”

Barrasso later went on to marry musician Tony Barrasso, who also knew Presley. Her husband Tony was a member of the band that played at Presley’s wedding to Priscilla.

Presley gave them tickets to one of his concerts. Barrasso and her husband went to the concert. It was the only time she saw him in concert. According to Barrasso, they had great seats and the place was packed.

“His concerts were electric,” Barrasso said. “You know how some people are just stars and light
up the place, he was like that.”

When Baz Luhrmann’s music biopic “Elvis” was released this summer, Barrasso and her husband decided to rent the movie to watch. She was intrigued to see that about twenty percent of the movie was inaccurate.

“It gave me chills to see how good he was portrayed in the movie,” said Barrasso. “He [Austin Butler] didn’t look like the Elvis I knew, but his mannerisms were spot on.”

Barrasso decided years ago that she did not enjoy being in the press. She would turn away and avoid photographs. However, she did keep the presents that Presley gifted to her.

“My friends always ask me why I haven’t sold any of the items I have or why I don’t do interviews, I will not sell my memories,” Barrasso said. “You won’t find any pictures of me with Elvis, I never wanted to be in the press. I would turn my head every time a camera was near. But, I really got him at the best time of his life.”